Hello everyone! An important aspect of worldbuilding in a fantasy or sci-fi setting is often the planet itself. We’ve collected a few resources to help you out.

Depending on your genre and story, you might want to start big – with a whole solar system. Roll for Fantasy’s solar system creator lets you generate random solar systems or create your own. You can choose the star type, planet type and place your planets where you like. The advantage to the randomizer is that is generates planetary day and orbit time automatically; you will have to decide and calculate yourself in custom mode. The model doesn’t show relative orbits, though.

Donjon has a generator with nice visuals of the individual stellar bodies, but no “map”. This one on Mr. Nussbaum has an orbital view and lets you pick and choose your planets.

StarGen requires a download but seems to be quite variable.

If you have some time on your hands, you can try out Starchitect. It lets you set some base parameters and watch as your solar system evolves at a rate of a million years a minute.

Now that you know what your solar system looks like, you can get started on your planet. Assuming it’s earth-like, you’ll want to generate some planetary maps.

Donjon is a fractal map generator that will give you a whole planet. You can change some of the settings, but not define individual countries. It’s really pretty!

Finally, if you already know what your world looks like and want to make a nice visual of it, try Inkarnate. You can place elements such as mountains and forests yourself, set towns and cities… There is a free and a paying version.

What does this mean for your writing?

When working with sci-fi, the solar system generators can be a fun tool for figuring out (or letting a randomizer figure out) what kind of star our heroes are orbiting, how many planets are in a system, how many moons they have and how long it takes them to orbit their sun.

In a fantasy setting, the type of sun is not usually quite as important, though if you know the science behind them they can affect your world and society in interesting ways. But orbital length (how long is a year?), spin (how long is a day?),axis tilt (what are the seasons?), number of moons can add interest to your story.

That doesn’t mean you need to do all that. Unless you describe it otherwise, readers will assume an earthlike planet: yellow sun, one moon, 365 day year and 24-hour day, with climatic conditions similar to our planet. You can still have fun making or generating maps and deciding what the ecology of each region will look like and how it influenced the borders of the various countries.

Or just set everything in one little provincial town… But urban worldbuilding is for another post!

Check out more resources on space travel, clothing, food and more at the Library of Eclectic Knowledge on this site!

Whether in a historical or fantasy setting, you might find yourself with characters wearing clothing similar to what was worn in the 18th century. This can be fraught with pitfalls, including:

Fortunately, YouTube has a number of informational videos to help you with just that!

For women’s clothing, you can find out what a working woman wore, and how a middle- or upper-class woman would get dressed. The same resource exists for men.

And more importantly, there is also this wonderful testimonial of a young woman who wore 18th-century clothing every day for several years to dispel any misinformation about stays, petticoats and how warm everything actually was.

USING THIS RESOURCE IN YOUR WRITING

More resources for writers are available at the Library of Eclectic Knowledge.

Have something to add, or another resource to recommend? Contact us!

ORBIS is a wonderful resource that is basically a travel agency/Google Maps for the Roman Empire. With it, you can visualise routes, calculate travel times and cost of travel from most of the great cities in the Roman Empire. Variables include season, means of travel (on foot, by horse, by sea…) and a choice of “fastest”, “cheapest” and “shortest”. If ever you wondered how to get from Carthago to Alexandria in Summer, this is the website for you!

HOW CAN I APPLY IT TO MY WRITING?

Anyone writing in a pre-industrialised society or with characters having to cover large distances on foot or on a sailing ship can use this tool to figure out travel times! Just pick two cities at about the distance you want them to travel, choose your mode of transportation and let the website calculate it for you.

The price is given in denarii, but… here are a few denarius to dollar converters:

More resources on the page “Resources for Writers”!

Come one, come all! I have long been wondering how to contribute to the writing community. Everyone seems to have a writing blog. So I have started a resources archives instead! I’ve been gathering resources on everything from breakfast foods to cask measurements and thought other authors might enjoy as well!

This one’s for writers of historical novels or specific settings inspired by history. The New York Public Library has an amazing collection of old menus that will help your historical meal feel authentic. They’re in the process of transcribing them all to help users search for specific foods and improve accessibility – and you can help! There is even a map function to help situate the restaurant in New York City.

Find them here or enjoy a selection on this site.

HOW CAN I USE THIS RESOURCE IN MY WRITING?

The Magical Theory Professor is officially in Beta testing! But before I continue Part II of the Gramarye series I want to tweak some of my short stories.

Currently, I’m expanding “So You’ve Been Abducted by a Dragon – Now What?” I will then take the expanded story and split it into two, to give myself more options on the market (some publications don’t take stories over 5,000 words and my short stories tend to fall somewhere in the 8,000 to 10,000 range – often too long for short story pitches but too short for novellas. Sigh.)

After that I am going to try and make my story “Coat of Many Feathers” (in the “I (Don’t) Dream of Genie” universe) into something less creepy and more palatable. Right now it’s ugh.

Still working on synchronising the Magical Theory Professor so I can get it out to my beta readers – and finding all sorts of minor tweaks in the process. Which I can’t just leave because I might forget about them in another run-through. Sigh.

Also doing interesting things to my urban fantasy short story Prosperity, which I’m working on in a sort of double-harness. I have one “short” story version (at just under 10,000 words, it’s a bit of an iffy designation) and another I am expanding into a proper novella (currently at about 13,000 words). It’s an urban fantasy featuring an Egyptian sleight-of-hand magician and her trusty Genie. 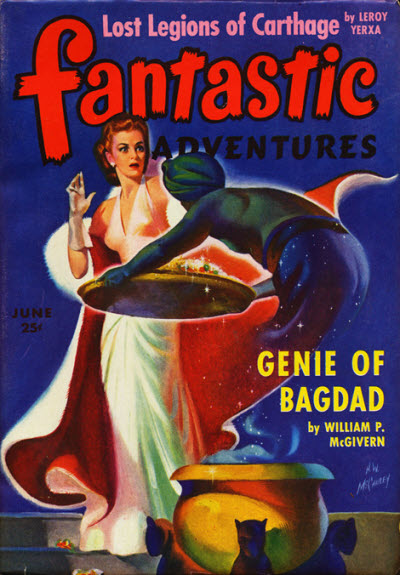 Genie doesn’t look like this and neither does Salima – I just loved this cover. By Ziff-Davis Publishing / Harold W. McCauley on Wikimedia Commons

This is also the springboard for this year’s NaNoWriMo project. For those unfamiliar with NaNoWriMo, it’s a friendly competition to write 50,000 words in 30 days, making November into National Novel Writing Month. I’ll be “cheating” this year by doing a series of short stories focused on Salima instead of a novel. Don’t know if I’ll make the 50,000 words (I have less make-up time this year if I don’t meet my daily goals on my daily commute than I did in previous years), but we’ll see! 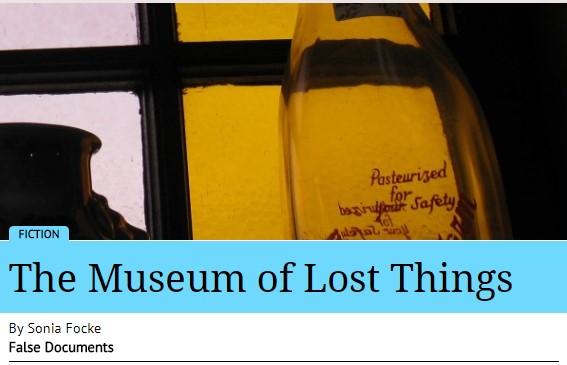 The Australian magazine Overland has published The Museum of Lost Things!

First run-through is done! I still need to synchronise the changes I made so there are no contradictions and compensate for a few things I’ve cut, then we’ll be ready for beta testing.